【Dining Tables All over the World】Irish Cuisine Cooked by a Giant!? Let's Experience Ireland in a Exciting Restaurant! 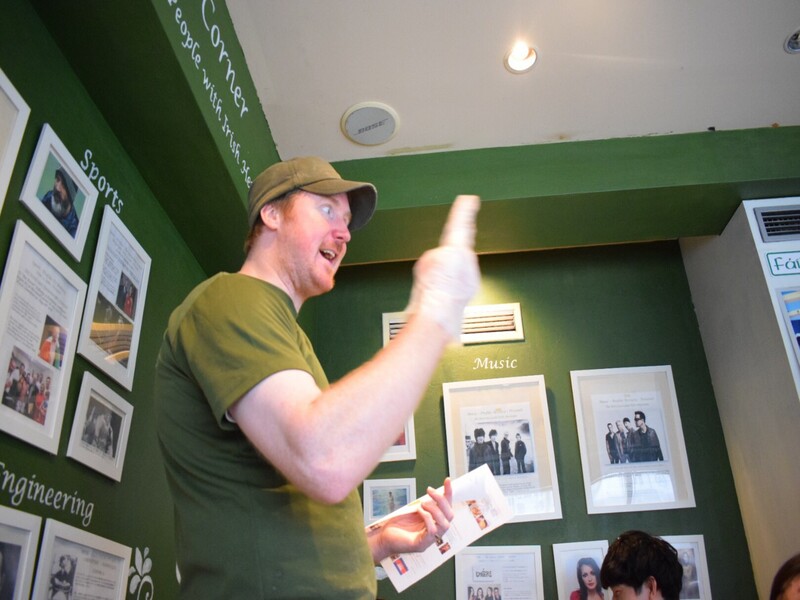 Dia Duit! This is Yuya! I am in charge of this programme.

Eat! Talk! Think! in this hands-on programme in which you can enjoy cuisine all over the world and international exchange by using your five senses in a restaurant or catering in Tokyo.

The destination in June was Ireland!
We chartered ""The Giant's Stew House"" in Togoshi-Ginza Shopping District. I will report the brilliant experience in BORDERLESS DINERS with the jolly and animated owner as if he were from Super Mario.

The Jolly Owner is the Bomb! Let's Enjoy Learning about Ireland! 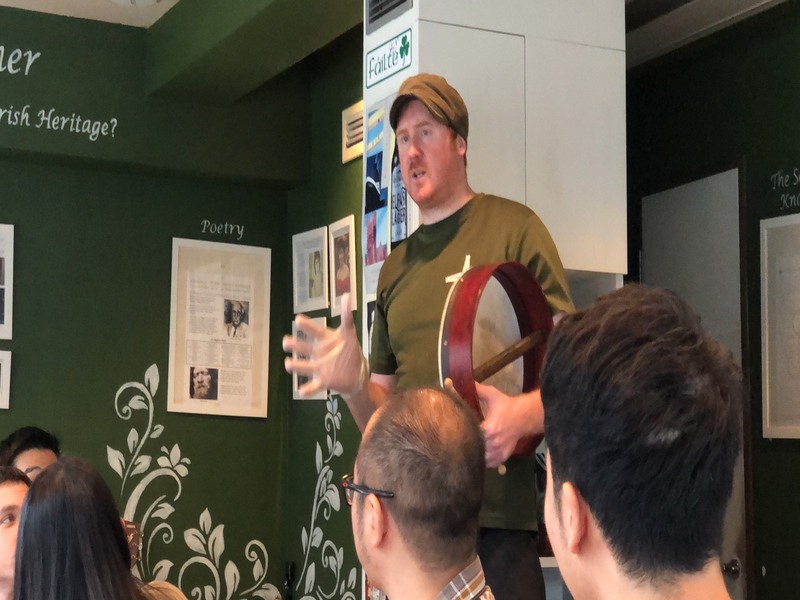 From Togoshi Station, walking straight on Togoshi Ginza Shopping Street, in style today, for 10 minutes and you can find ""the Giant's Stew House"".

The owner of this restaurant, Alan from Ireland, is very friendly, jolly and talkative. He is such a super-nice guy that he can cheer up people around him.

"Hello! Everyone! Thank you for coming! Xie Xie! Merci! Grazie! Vielen Dank!"
Today, I'm gonna serve you the most delicious and authentic varieties of Ireland cuisine handed down directly by my mother and super cool Irish culture!

The Deep History of Ireland! Everything Starts from this Land. 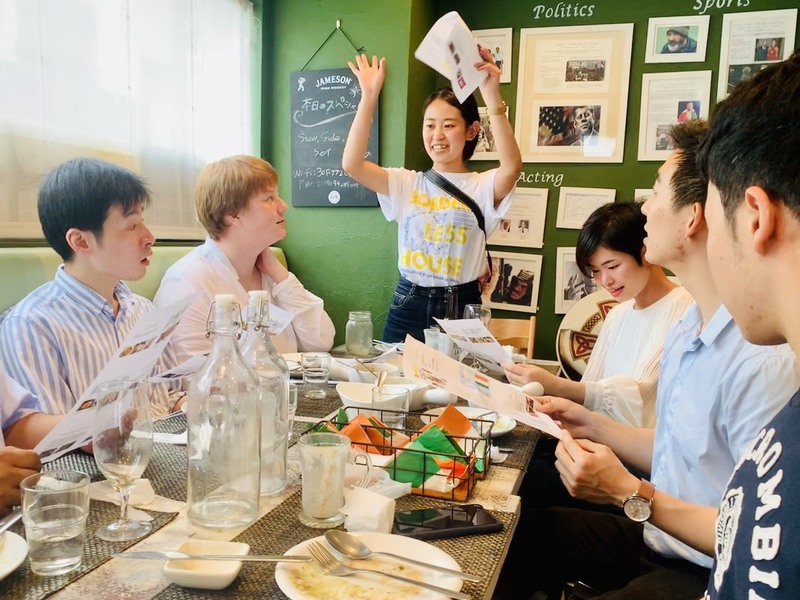 Ireland has the prehistoric remains such as Newgrange, the vast nature since the ancient times like Aran Islands and plenty of legends and myths on which Harry Potter and Lord of the Ring are based.

Those are called "Celtic Culture which is originated in ancient times and Ireland has kept until today.

The legend of "giant" used in the name of Alan's restaurant is also one of the Celtic culture.

What kind of food do they eat in Ireland where fairies live and giants stride and whose culture has significant effects on Western Europe? 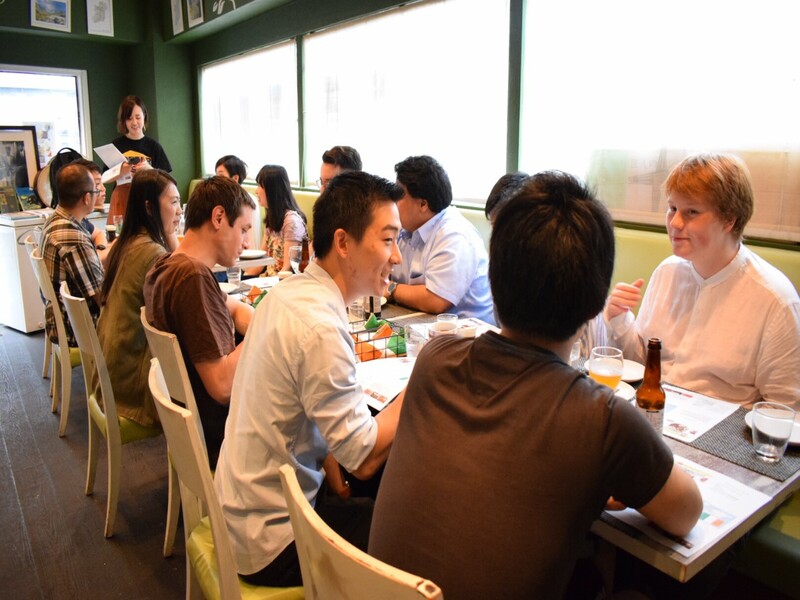 The unique characteristics of Irish cuisine is that it has light taste and brings the best in ingredients, such as mainly potato, then mutton and beef.

They often have creamy mashed potatoes or soda bread with stew, soup, bacon's or smoked salmons.

Above all, meat!
As it is rainy and there is no change in temperature throughout the year in Ireland, there are huge thick grasslands where cattle and sheep grow up.
Thanks to that, the meat from Ireland is so tasty that Alan gives it an approval. It is extraordinary delicious!

Potato is the Soul of Irish! Mashed Potatoes Melting in Your Mouth. 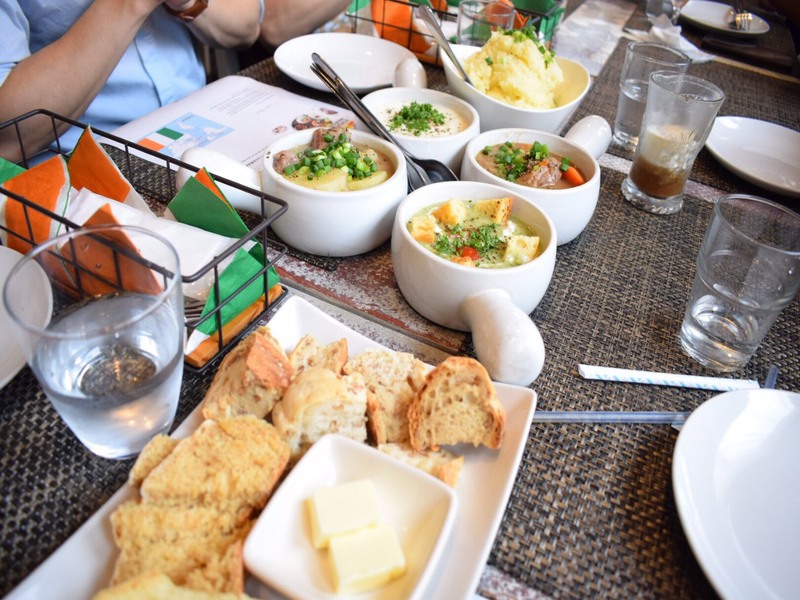 This is the mashed potatoes with the satisfying smooth texture, cooked with the traditional home cooking skills by Alan. 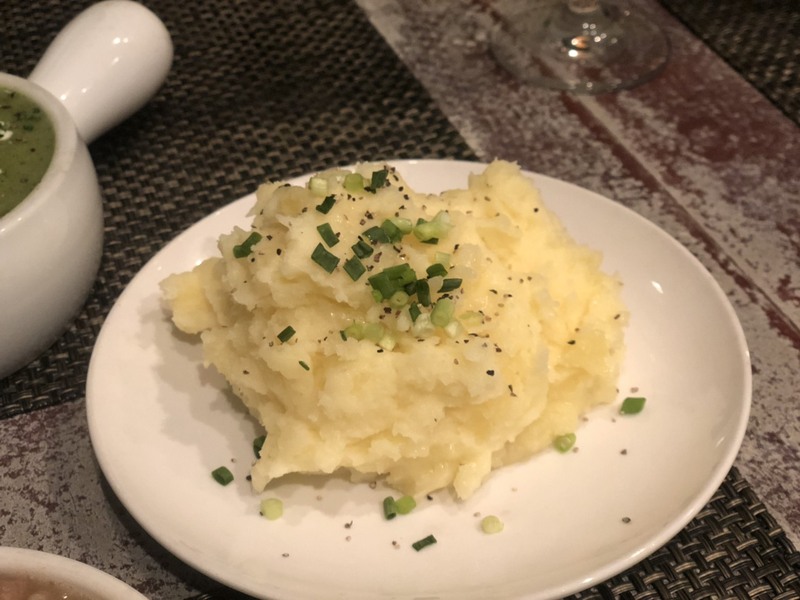 Ireland and potatoes are inseparable.
The mashed potatoes made of such precious potatoes taste really good.

They have rich taste and creamy texture thanks to abundant milk and butter.
The feeling when we put them into our mouth is indescribable.

The participants were impressed with the rich creamy mashed potatoes for the first time. 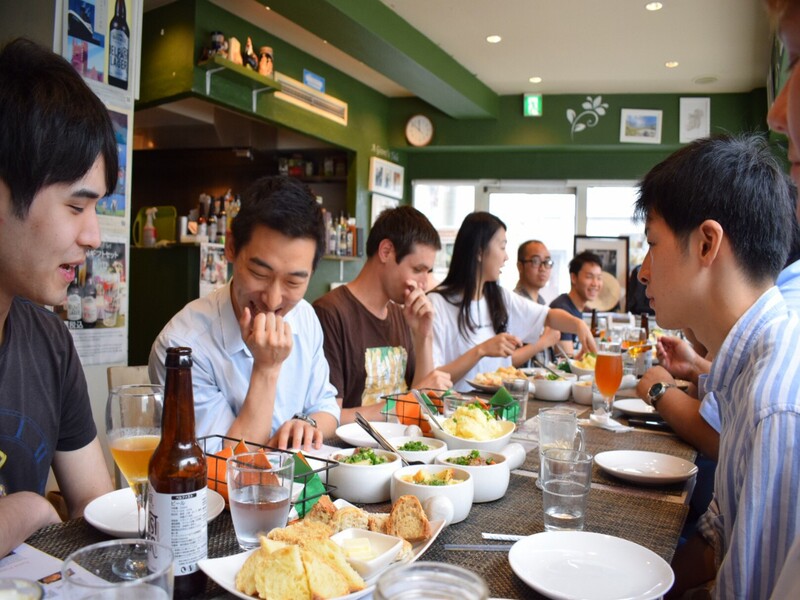 It is Hard to Choose from So Many Varieties! Irish Stew Brought to a Simmer 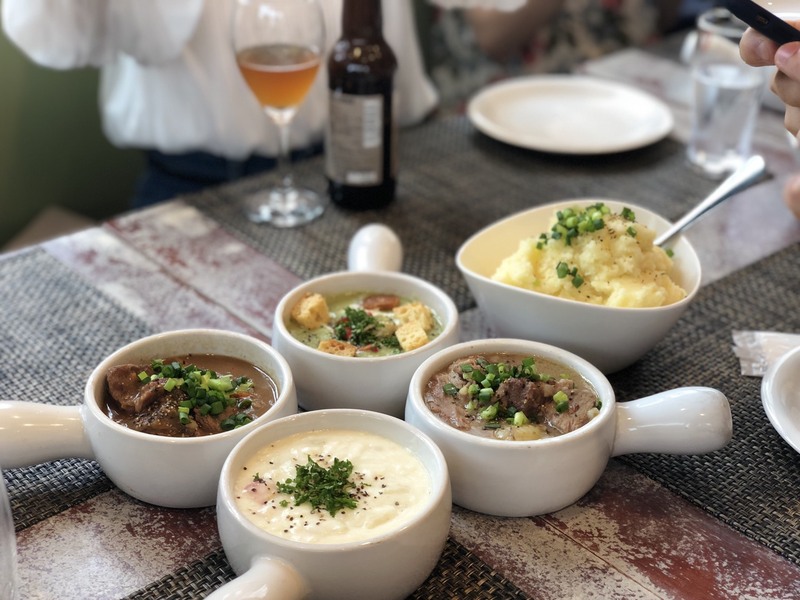 Stew is also essential for Irish home cooking.
The tastes of stew are so various that this restaurant's name has "stew" in it.
The most common stew is Irish stew and Guinness stew.

Irish stew looks similar to Japanese home cooking "Nikujaga", a mixture of meat and potatoes.
It is chunky and filling thanks to a plenty of potatoes.

And Guinness stew!
This stew has the aromatic mixed flavor of richness and bitterness, simmered in Guness beer from Ireland where beer and Irish wisky is indisreppensable.

Besides those kinds of stew, Alan kindly served us clam chowder with salmon and spinach soup.

While they are all stew, each has completely different taste.
We couldn't stop our hands from dipping soda bread in stew and put stew on mashed potatoes and the plates got empty in the blink of an eye.
The most popular one was Irish stew with lamb after all.

Coffee with Whisky!? Irish Coffee is an Acquired Taste 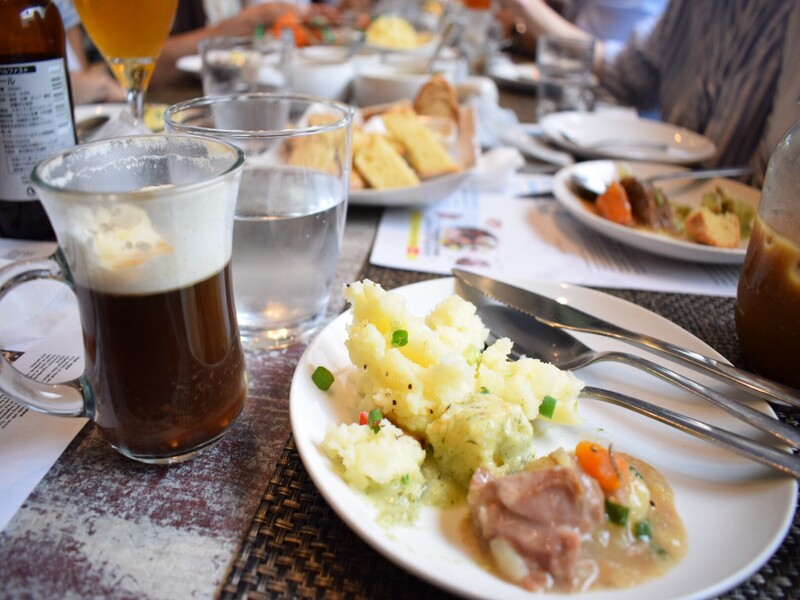 Irish Coffee as dessert for finishing off!

Irish Coffee warms a cold body in the freezing Irish whether. When a lot of airplanes stopped at an airport in Ireland to be refueled, seeing passengers waiting for refueling done and shivering with cold, a chef started serving coffee with Irish Whisky to them.

It is a dessert for mature people, a hot coffee with Irish Whisky and whipped cream on its top.

The combination of the sweetness of whipped cream, the bitterness of cofee and the rich aroma of Irish Coffee and whisky is very satisfying.

Once He Speaks about the Legend of Irish Giant, He Goes on and on about it. 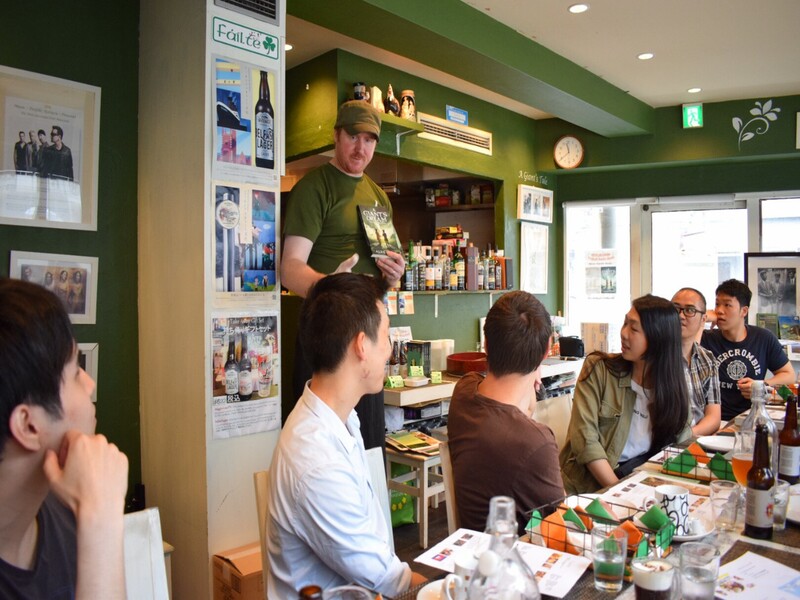 As above, "A Giant's Stew House" is where you can eat traditional and very delicious Irish food. He opened the stew house after the legend of a giant because after he came to Japan, he began to think that people need a restaurant like a community which conveys the history of Ireland where he loves in Japan where he loves as well.

The walls in the restaurant full of such thoughts is filled with Irish episodes, celebrities and the recommended attractions. 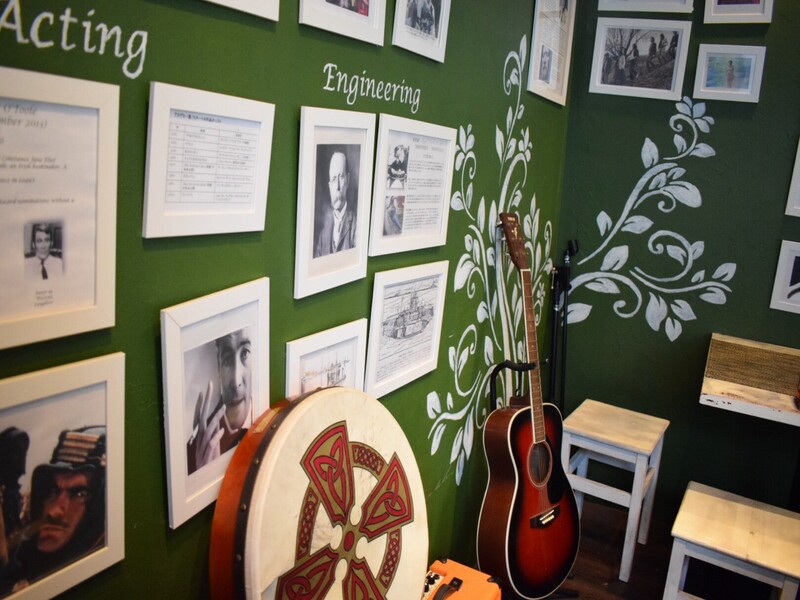 Alan also wrote a book about the Giant Legend to tell Ireland!

According to him, it is the second best book following Lord of the Rings. In the event, he gave such a masterpiece to the participants!

Alain's passion for Ireland is so strong that he usually tells the story about the Irish stuff in the restaurant, food, beer with his files about Ireland to customers after they place orders.

Alan keeps telling about Ireland in this foreign country Japan which is far away from Ireland, while both are kind of similar in a sense, as they are the island countries. 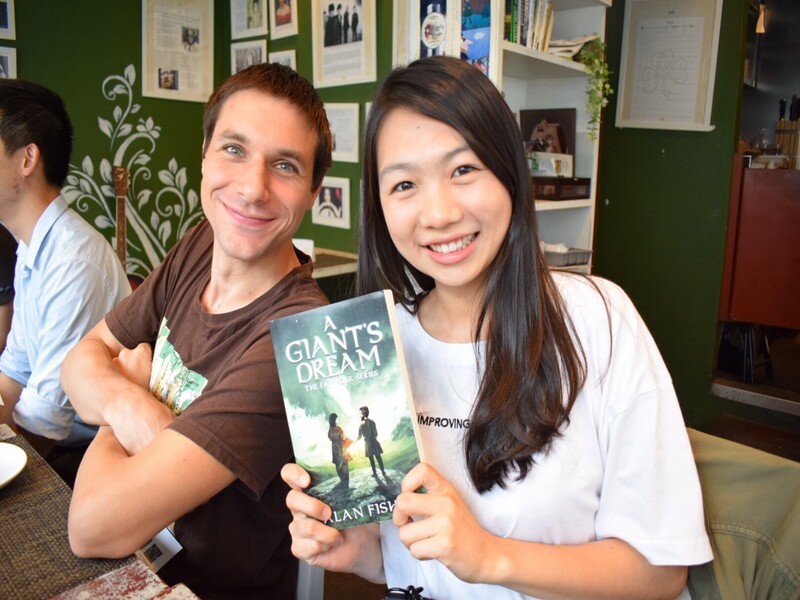 Ireland is a fantastic and romantic country with lots of legend, myth and fairies living together!
And Irish people are bright, humorous and extremely interesting just like me!
So it's my dream to make people all over Japan happy by giving the Irish people's spirit and power!

Thus, Alan taught me a lot about Ireland.
Alan's character, attracting people by his cheerfulness, might come from his background, growing up in Ireland with its vast nature and fantasy.

The journey to Ireland was deep and exciting thanks to Alan's laughing jokes.

The Next Destination is Mongolia! International Experience Restaurant Traveling to Another Place Monthly! 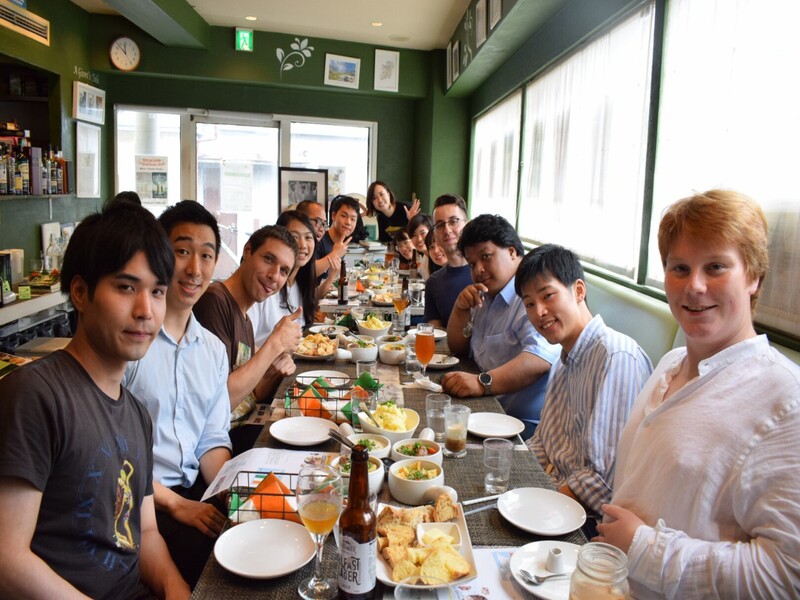 BORDERLESS DINERS ~Experience International Restaurants and Travel around the World~is the Monthly Hands-on Programme only for the Tenants!

The next one is going to be held on July 21 (Sun). We will charter a Mongolian restaurant in Shinjuku!

The restaurant is cosy like a house of Mongolian nomads. You can learn about Mongolia with a Mongolian married couple happily with tasty food!

Now then, what are you going to experience in the next journey?
You are going to love the report next month!